Health Information on the Internet: Fish To Avoid: Case study

Introduction: You find an interesting article and - you want to believe what it says.

Fun facts are fun.  They are a great way engage your audience. It is much easier to let someone else do the research and hand you the answers. It feels comfortable to trust until you have reason to doubt, which makes it easier to manipulate you.

Content Summary: Article is based on Cufone's advice, which may be backed by her data, but her data may reflect eco-friendly and sustainable farming bias.

Is"12 Fish You Should Never Eat"

Relevant? Yes, if  you want to feel like you are doing something positive to protect the environment.

Opinion or data based? Article is based on opinion > which is based on potentially biased view of data.

Biased?  Yes.  Bias: Against industrialization of oceans for money at the cost of ocean and food-fish species integrity, diversity, and health.  In favor of careful consideration of fisheries management and leans towards sustainable (productive over long periods at reasonable expense)  farming methods.

Accurate?  Depends on your point of view and  the data you prefer to view.  If your bias is towards making a lot of money from a world resource without taking responsibility for the impact, then you may disagree with her advice

Does the article reflect the data found in the references? Let's see...

Some articles put in hyperlinks to their resources.  Other times you need to figure the name of a person or resource being quoted, and any other identifying information.

You can then google them along with the topic to see
1) Are they an authority?
2) Does the quote sound like something they would say?
3) Can you find any other published content attributed to them?

With this article, you could easily google “Monterey Bay Aquarium’s Seafood Watch” or “NOAA Fisheries”. Fortunately, the sources are linked out from this article.

Article to be examined: "12 Fish You Should Never Eat" BY EMILY MAIN AND RACHEL CLARK in Good Housekeeping Nov 29, 2021

"Good Housekeeping" magazine has been in business a long time, so must provide good information.

Brand: Tips and useful information for making your home and garden comfortable and special. Implied promise: "Do this" and you can feel pride when showing your place to friends, family, & neighbors. Reputation advantage: Trusted. Not a tabloid*. Reputation risk? Brand can be tarnished if too much misinformation is published. Having editors that check for accuracy protects the brand.

Brand impact from publishing misinformation? Diluted, can blame the author.

Individual impact of misinformation? To you, probably not much, as long as you don't have health issues that complicate your diet, like pregnancy or some other condition.  A little poison now and then, or over fishing, may not affect you adversely.  Some people might get sick. Some individuals may gain a fortune or go bankrupt.

Advertiser impact from misinformation being published?  Since misinformation can use emotional manipulation instead of facts, more eyes may be drawn to content; misinformation may be an advantage to advertisers - until the brand of a publication is tarnished.

Global Impact of Misinformation? Some industries may over-fish an area and ruin the habitat or cause the endangered species to go extinct. Wrong solutions may waste money, time, and effort.  Wrong habitats and species could be protected or destroyed.

*Tabloids: Also known as gossip-rags or shock-press. Viewer expectation should be racy entertainment rather than accuracy and facts.

3  AVOID Sharkes, Skate and Rays
Eat this instead: Pacific halibut and Atlantic mackerel. (And when shopping for scallops, avoid cookie-cutter perfect ones.)
Surprise!  "If you see sea scallops that are a uniform size and shape, you may be looking at shark, skate or rays.”

4  AVOID Atlantic Cod (for now_  cod stocks collapsed in the mid-1990s and were in such disarray that the species has been listed as one step above endangered
Eat this instead: Pacific cod

5  AVOID Tuna
Eat this instead: Tinned sardines or even organic tinned chicken.

8  AVOID Orange Roughy
Eat this instead: Opt for yellow snapper or domestic catfish

9 AVOID American Eel often high in PCBs and mercury, and eel populations are too often overharvested.
Eat this instead:  Atlantic- or Pacific-caught squid instead.

12 AVOID Octopus  - too smart to use as food.
Eat this instead: Squid

Safe-to-eat fish based on how and where they’re farmed or caught.

Step 2 Looking at other authoritative resources

You can jump head to box addressing question: 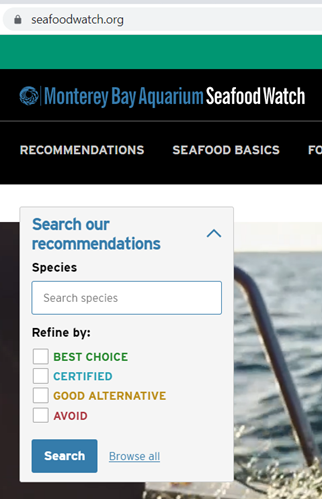 Exploration led me to Guides: 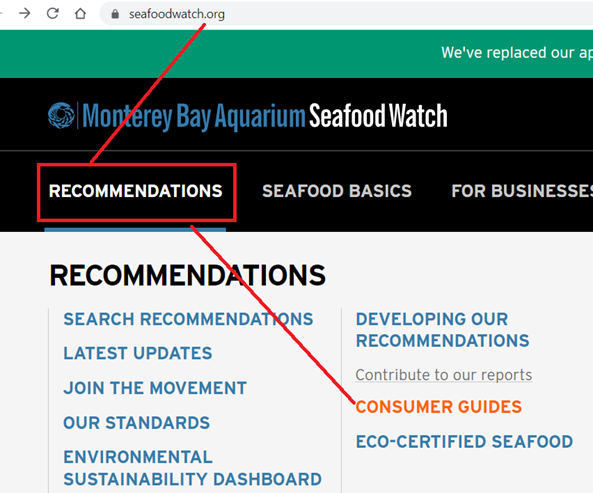 Bingo!  Easy to use reference:
Consumer Guide from Seafoodwatch.org

How does that compare with Article?  First, I will gather more notes from the other resources discussed in article, and find if Cufone'e is an authoritative source.

Do these resources confirm what Cufone advised?

Most of what the article reported Cufone as advising was confirmed by the resources mentioned in the article. Article may misrepresent what was advised due to recording or editorial oversight.

A few assertions were not collaborated by other sources:

For example, a disagreement about Coho and Sockeye Salmon. The article suggested them as an alternative, but they are also listed in ESA Threatened & Endangered database list https://www.fisheries.noaa.gov/species-directory/threatened-endangered.
Maybe some Coho and Sockeye Salmon are not in danger, databases are specific to fish origin. They could be endangered in one region and not another.

The article listed Atlantic mackerel as an alternative, but this is listed as "Avoid" by Seafoodwatch National Consumer Guide https://www.seafoodwatch.org/globalassets/sfw/pdf/guides/seafood-watch-national-guide.pdf.  Status could be that the status changed, or is regional.

The Title "12 Fish You Should Never Eat " include shrimp and octopus, which are not fish.  The title should have referred to seafood you should avoid.

Otherwise the reported information was very accurate, with some more or less collaborated by other authoritative sources.  I would give the article an "A" rating.